If an oasis is located within your kingdom or borders it, you can occupy it with troops and conquer it thereby. In wild oases, all animals need to be defeated first. Occupied oases always belong to the kingdom that has the most troops stationed in them. An occupied oasis gives a resource production bonus to up to five players of your kingdom.

For this to work the oasis needs to be within the 7x7 of your village and a free oasis slot needs to be available in the Embassy. The first five players with the most troops in the oasis can then use the bonus in one of their villages. The upkeep of stationed troops will still be deducted from their home village.

Bonus on resource production by rank:

There is one additional requirement to conquer it for the kingdom: It has to be located within or next to the border of your kingdom.

If all defending troops within an oasis have been killed, it will once again become a wild oasis.

How does bonus production work?
After you have gained an oasis you will receive the following bonuses:


NOTE: This is not the same influence, kings have on their governors. It is only the influence of one specific player on the oasis.

How to collect resources?

Once the resources are available to collect, this button will become clickable. The resources will be sent to all players, who produced resources in the oasis. If no player collects the resources for 6 hours, they get collected by an NPC and are delivered to the different players in the same way. 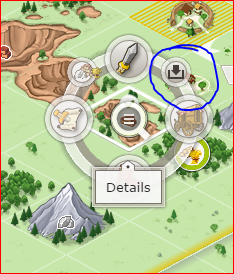