In the tutorial steps as you begin to play, you will have the option to choose to be a king or a governor.  Choose King if you wish to rule over a kingdom and receive tributes.  If you chose governor and wish to become a king at a later time, you may do so after building your Embassy.  On the Kingdom tab of your Embassy you will see information about the kingdom you are in and a “Found kingdom” button at the bottom.  Select that button if you wish to start the coronation to become a king.

a) The first coronation is instant, the second one takes 1 day, the third one takes 2 days and so on.

b) To change back to governor you have to wait 24h after a coronation. If you crown yourself king in your Embassy, some of your villages will exert influence on surrounding squares. Please note that as a king, you can only have an active treasury in half of your villages and only those villages will create influence.  If villages of other players are in your area, you have the task to protect them against attackers. In exchange, you can collect tributes in the form of resources from them. As a king, you can found analliance or join an existing one. You shouldn't attack villages in your sphere of influence. If you do, all villages of the owner will leave your kingdom. Kings can also promote their governors to the role of Duke.  This gives them additional permissions and they can view more information within their kingdom or alliance, as well as generate influence for their kingdom in one village/city.

How to expand my kingdom/how to get new governors:

In order to expand your kingdom and get new governors, you must first extend your influence. The area of a kingdom is mirrored by the villages of the king that have an active treasury.  The more inhabitants these villages have, the greater the influence on the surrounding fields.  (For more detailed information about this, please visit our page on How Influence works). As soon as the influence on a governor of another kingdom reaches 50% you can invite him into your kingdom. To do so, click on his village on the map. At 4 o'clock position you find a button "Invite into kingdom". In case a governor received an invitation and gets inactive he will automatically join after 3 days. 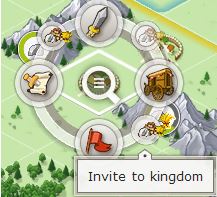 When abdicating as a King, he will only be left without an alliance in the following event: