In the world of Travian you are represented by the hero.

Your hero can be sent as reinforcement to other villages like every other unit. However, unlike every other unit, it is possible to control your hero from any one of your own villages at a time. To use your hero from another one of your own villages you must send him there as a reinforcement and tick the "Change hero home town" box while doing so. Once your hero arrives at the village you sent him to, you will be able to control him from that village.

Depending on your selected Travian tribe, a hero will gain one special tribe ability. Those special abilities can not be upgraded by the player: 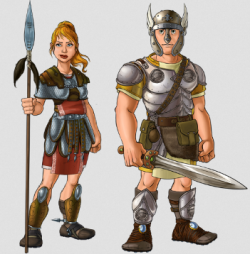 You can choose a male or female hero and can change the facial characteristics and hair. As you play Travian, you will have the chance to get equipment which will have a benefit for your villages or hero and will also change his/her appearance.
In addition there are a lot of consumables with different effect, which your hero can find.

If your hero dies, he has to be resurrected. There are two ways to accomplish this. You can either use a water bucked (can be found on adventures or bought for silver in the auction house) or spend resources. The resurrection costs for the hero depening on its level and tribe can be found here.