In the tutorial steps as begin to play, you will have the option to choose to be a king or a governor.  Choose governor if you wish to be part of a kingdom and not have the added responsibility of leading.

You will be a governor of the king in whose area your capital village is located. With the kingdom, you are also assigned to the alliance of your king.  Within the kingdom, robbers camps, which you can battle together with other members of your kingdom, will spawn from time to time. Robbers camps, as well as hideouts, which every now and again spawn near your capital village, award you with resources and stolen goods.  Stolen goods can be sold to your king via your hero inventory, in order to receive resources. Your King will receive the sold stolen goods in the form of treasures.

Kings can also promote their governors to the role of duke.  This gives them additional permissions and they can view more information within their kingdom or an alliance.

How do I change my kingdom as a governor?

In the beginning of the game there are not that many options to change your kingdom as a governor. You are able to change to another kingdom as soon as its king got 50% or more influence on your village.

As soon as you got the option to settle your second village you can almost freely decide which kingdom you want to be part of.  Depending on where you found your second village the king controlling this area can invite you into his kingdom and you are able to change immediately. Of course you should ask the king before founding a village in his area, not every king will accept the request.

In addition there is of course always the possibility to crown yourself king.  After that someone can invite you into his alliance. If you abdicate as a king while still being in this alliance you automatically get assigned to the next king of the same alliance as a governor. However you are only part of his kingdom but still lie in the area of another king in this case.

Keep in mind that you lose your beginners protection when making yourself a king and need to wait another 24h before being able to abdicate again.

How do I switch from governor to king and back?

Both of the two options are found in the embassy.

If you are a governor and wish to become a king, open your Embassy and you find a button at the bottom of your embassy, that says "found kingdom": 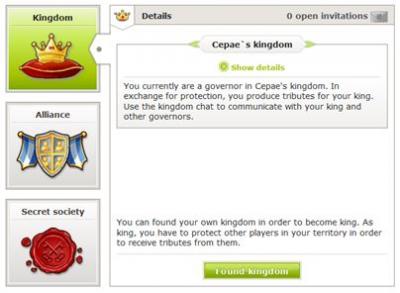 To switch from king to governor (abdicate) click the little x next to the name of your kingdom:

a) Each coronation prolongs the next one. The first one is instant, second needs 24h, third 48h and so on.
b) To change back to governor you have to wait 24h after a coronation.

Help me, my king is inactive!

First of all: Do not panic. The game just started and there is still a lot of time to change all of that. There are different options to change your king.

If your king isn't completely inactive but logs in from time to time, you can still change kingdom if you want to.  Another king could invite you as soon as he has 50% influence on your village. The most important thing is don’t give up, but talk to your neighbors (kings and governors) to help you decide what kingdom you would like to join.

You can also wait for your second village and found it within another kingdom that you wish to join.  This can take a little longer, but allows you to join a kingdom that is further away from your first village.